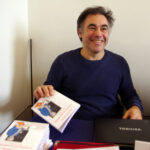 This text will be overwritten by jQuery

KAM is an acronym for Kolmogorov-Arnold-Moser. KAM theory gets its origins back to the classical work on celestial mechanics and perturbation theory. In the Keplerian motion, one neglects the influence of other planets. Say one may think that the moon is rotating around the Earth but this motion does not take into account the influence of the sun on it. This is fine for small time but not for large scale of times. The interaction can also be used to detect a planet: the anomaly in the motion of Uranus lead to the discovery by Galle and Le Verrier of Neptune. So celestial mechanics became a classical subject of mathematics and gave eventually birth to diferential calculus and later to quantum mechanics and perturbation theory. In the 50's the subject had been abandonned, when Kolmogorov discovered the existence of stable quasi-periodic motions. The basic idea is rather than solving differential equations search manifolds which are invariant, the KAM tori. Seventy years later, the subject develop and became fascinating. But... as it grew, it became more and more technical and hermetic. Only the very happy few, who can master pages of estimates are admitted within the small circle of experts even among mathematical working in dynamical systems. One can hardly imagine an algebraic geometer not knowing the Riemann Roch theorem in its simplest form or the Hodge decomposition theorem. It is customary to meet specialist in dynamical system having no knowledge in KAM theory. Now imagine for a moment that algebraic geometry developped without commutative algebra, without sheaf theory and without cohomology then you will get a picture of the situation we face in KAM theory. The KAM project aims at establishing foundations for KAM theory. Of course, these might seem ridiculous to some experts who do not need any theory. At least this is what some experts think. While KAM theory is usually understood as the study of invariant tori, we share a different point of view: we consider KAM theory as a category of Banach functors, that is, a branch of functional analysis that we propose to call functorial analysis.

Originally, we had no ambition in proving anything new. We only wanted to unify standard result and somehow understand even the simplest statements. Duco van Straten gave a talk in 2016 where we explained this absence of ambition that we had at the beginning: https://video.ethz.ch/conferences/2016/poisson/day2/ff215665-512a-4d94-9fd3-f63575d5ac62.html At that time we did not understand that our point of view was more specific (we restrict to the analytic case) but also more powerful than the usual point of view which uses implicit function theorems. We were thinking it was just equivalent to Hamilton and Zehnder implicit function theorem techniques but just simpler and more convenient. Neither Hamilton nor Zehnder was able to prove a statement on group actions and the only known result was in the thesis of Sergeraert. In our book on KAM theory we revisited the versal deformation theorem for hypersurface singularities: the Siegel theorem for normal forms of vector fields and the Kolmogorov invariant torus theorem. Note that we do not aim at short proofs at all but at conceptual proofs which enlighten the hidden part of original proofs. https://arxiv.org/abs/1805.11859 https://arxiv.org/abs/1809.03492 https://arxiv.org/abs/1810.09423 If you are student with a good background on differential calculus and differential geometry wanting to learn KAM theory, this is a good place to start. Certainly you will find in this book the longest proof of the Kolmogorov invariant theorem that can be found in the litterature but maybe not the least comprehensive. It depends very much on what type of mathematician you are.

Our friend Bernard Teissier suggested we submit it to Lectures Notes in Mathematics. Secretly we were thinking that Teissier will find a referee among our friends and that they will accept it praising the originality and great scientific value of our research, as scholars usually do. But Teissier did not do so. The reactions of the referees to our book were devastating: they were very much offended by the content of the book. Here is a small sample of these critics, Reviewer #1: in the preface it is said that this book comes from lectures given around Herman's invariant torus conjecture and the "new language" of functors was chosen in order to "simplify" the exposition and the whole frame where this theory is developed. I know very well the existing literature on KAM theory as well as the notes of Herman himself, transcribed/used or completed by Féjoz, Bost, Fayad and other experts in the field, either in some seminal original papers - where the invariant torus theorem is proved among others - or in some expository review (séminaire Bourbaki etc), and I can say that the language/point of view used in this book is very hard "to digest". I think that it makes things even more complicated than what they already are and I can hardly imagine a dynamicist reading this book in order to understand something about KAM theory, or to learn some clearer and abstract approach to deal with these kind of problems. Reviewer#2: ...[The book] looks shallow, superficial and ill informed. The authors seem to have taken one or two papers in KAM theory and add a lot of formalism to them. Rather surprisingly, they have ignored many papers by other people Zehnder, Bost, Yoccoz, Broer, Sevryuk, Huitema, Haro, Gonzalez de la Llave, Wagener, Hanssmann, etc. in which the action by groups is considered. I could find very little novelty and not even been up to date of recent developments. The main thing is to develop a notation in terms of category theory." Beautiful and very neat works already exist on the matter, proposing unified abstract frames in which one can derive several results from a general common functional denominator (the somehow geometrical approach proposed by Herman himself), and I would say that the language/approach of this book kind of betrays the very deep but simple and at the same time proper, "geometrical" and general point of view of Herman' school, from where to look at these conjugacy problems.

After reading this last report, we found that references given to us by specialists only contain mainly vague notions or heuristics about group actions. So what kind of results do we claim to have which are not in these works and why are these useful? It is reasonable to think that a group theoretic action in infinite dimensional space should include an exponential map. So you should construct a family of operators $X$ and a group $G$ together with an exponential mapping: \[exp:X \rightarrow G\] Then the reader may think but I have this already. Take $X$ a Banach algebra then the exponential algebra. Well the problem is that a bounded map from a Banach algebra is to specific. Think for instance of the flow of a vector field, there you exponentiate an unbounded operator. If your theory does not include a simple example like that, you will hardly be able to prove any statement about group actions. The second operation you should have is infinite product. KAM type procedure involve infinite products of exponential $\prod_{n \in \NM}e^{u_n}$. So one should give a criterion for convergence. We were successfull in doing this in the analytic context but to our knowledge such a construction is unknown in the $C^\infty$ case. So it is far from being trivial and well known.

Disreagarding the critics, we came back to the proof of the Herman conjecture. So maybe it is time to say what this conjecture actually is? Probably a cornerstone in KAM theory and a painful one. In his ICM lecture of 1998, Michel Herman formulated several problems and conjecture among which the invariant tori conjecture. He did it for discrete dynamics but there is also a conjecture for continuous dynamics and we consider the later one for simplicity. The weird thing is that conjecture is in some sense the simplest version possible of the KAM theorem: it states that, under arithmetic conditions, a Hamiltonian motion has a positive measure set of invariant tori carrying quasi-periodic motions. A non specialist will hardly notice the difference with the KAM theorem. The question one might ask is: "how are we able to prove the KAM theorem and not be able to solve the Herman conjecture?" In our point view, this was due to our absence of a deep understanding of the standard KAM theorem. This might seem unpleasent to specialists but this is what we honestly think. In 2012, Mauricio Garay proposed a proof in three steps: